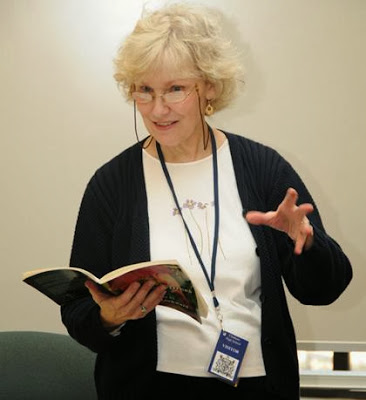 This week’s prompt is from guest blogger Diane Lockward. Diane is the author of three poetry books, most recently, Temptation by Water. Her previous books are What Feeds Us, which received the 2006 Quentin R. Howard Poetry Prize, and Eve's Red Dress. She is also the author of two chapbooks, Against Perfection and Greatest Hits: 1997-2010. Her poems have been published in numerous journals and included in such anthologies as Poetry Daily: 360 Poems from the World's Most Popular Poetry Website and Garrison Keillor's Good Poems for Hard Times. She is the recipient of a NJ State Arts Council Poetry Fellowship and has received awards from North American Review, Louisiana Literature, and Journal of NJ Poets. Her newest book, The Crafty Poet: A Portable Workshop, was recently released by Wind Publications. The book includes helpful tips for writing poetry contributed by 56 distinguished poets, along with 27 model poems and prompts with 2 sample poems for each.

Please note that you can order The Crafty Poet from the right sidebar by scrolling down to the book cover and clicking on it.

Be Sure to Visit Diane’s Website: www.dianelockward.com
and Her Author Page at Amazon.com:
http://www.amazon.com/Diane-Lockward/e/B001K7W3U2

The following prompt is one of ten bonus prompts in my new book, The Crafty Poet: A Portable Workshop. While the other prompts in the book are more complex and focused on craft techniques, the bonus prompts are quick and easy. They are also inexhaustible, that is, you can use them over and over again. You should never again find yourself at the desk with nothing to say.

Choose one word that you like the sound of. Be sure it has at least two syllables. Suggestions: purple, silver, yellow. I like colors because they immediately bring in the visual. But don’t feel limited to colors.

Now put your word on the top line of your paper, all the way to the right.

Jumping off that lead word, quickly brainstorm a list of words with similar sounds. Avoid exact rhymes. One word per line. Each single word should lead to the next. Do not go back to the original word. If you include only words with the same initial sound, this will result in nice alliteration in the poem you write. But this is an option, not a requirement.

Try to get at least ten words.

You should end up with a first draft that has some promising sounds, not exact rhymes but near rhymes.

Note from Diane: The list of words above is the beginning of the list I created for my own poem, "Love Song with Plum." As you read the poem, you'll see that I stuck with all "p" words, but remember that that's an option, not a requirement. Although I did not include my entire list here, from what I did include, you can see that I didn't stick one hundred percent to the original order of the words. During revision I moved some words around. I seem to recall that I also added some words not in the original list. What I'm sure of is that I had a good time writing this poem. I hope you have a good time writing yours.

I take what he offers, a plum,
round and plump,
deeper than amethyst purple.
I lift the fruit from his palm.
Like Little Jack Horner, I want it in a pie,
my thumb stuck in to pluck
out that plum.
I want it baked in a pudding,
served post-prandial,
drenched in something potable,
and set on fire, to sit across from him and say, Pass
the pudding, please.
Spread on our morning toast, dollops of plum preserves,
and when we grow old, a bowl of prunes,
which, after all, are nothing more than withered plums.
But today the air is scented with plumeria,
and at this particular fruit stand, I’m plumb
loco in love with the plumiest
man. Festooned with peacock plumes
and swaddled in the plumage
of my happiness, I want to stand at the perimeter
of this plum-luscious
earth, sink a plumb
line for balance, then plummet
like a bird on fire, placate
all my desires, my implacable
hunger for the ripeness of my sweetheart’s plum.

Thank you, Diane, for sharing with us!