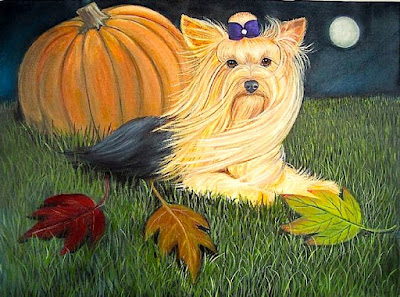 When witches go riding, and black cats are seen,
the moon laughs and whispers, ‘tis near Halloween.
—Author Unknown

BTW, did you know that the poet John Keats was born on Halloween in 1795? His last poem is an untitled, eight-line fragment that seems chillingly well-suited to Halloween:

This living hand, now warm and capable
Of earnest grasping, would, if it were cold
And in the icy silence of the tomb,
So haunt thy days and chill thy dreaming nights
That thou would wish thine own heart dry of blood
So in my veins red life might stream again,
And thou be conscience-calmed—see here it is—
I hold it towards you.

For Halloween this year, simply read a selection of Halloween and related poems to get into the "spirit" (see example poems below), and then write a Halloween poem that brings back the memory of a particular Halloween (from childhood or more recent). There are no guidelines or tips other than to observe the usual caveats and to have fun with this. Here you go ...