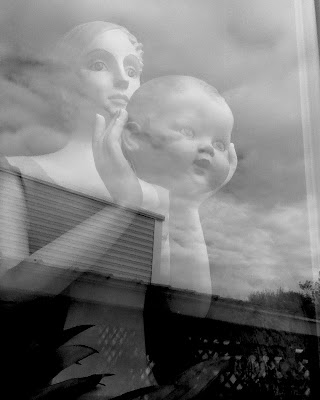 With Halloween just a couple of days away, masks and their particular psychology seems an appropriate subject for this week's poems—not literal masks, but the emotional and psychological variety.

In ancient Celtic times, people believed that they needed masks as protection against evil spirits that appeared around All Hallows’ Eve. Masks are still popular, and this time of year is characterized by every kind of mask from Snow White and Elvira the Vampire to Robin Hood and Freddy Krueger. However, there are masks that people wear year round that are psychological masks to protect themselves from various insecurities.

At one point or another, we all fear revealing our true selves, and so we hide behind masks of seeming indifference when we care too much, anger when we’ve been hurt, bullying when we feel we have no power, wearing expensive or outré clothing when we feel inferior, and outward shows of success when things like jobs and marriages are failing. Just as children (and many adults as well) do on Halloween, we all (from time to time) mask who we really are and take on a sense of being something other than our true selves. The “masks” we wear protect us from our vulnerabilities.

This week’s prompt deals with acknowledging a “mask” you’ve worn at some point in your life (past or present) to hide your true feelings from others, to hide something imperfect about yourself from the rest of the world, to make yourself feel better about something going on in your life, to hide emotional scars, or to help you move forward.

1. Begin by thinking about times you've worn a metaphorical "mask." Then, on paper, generate a simple list of those times.

2. Look at your list and pick a time to write abut (only one time).

3. Consider the emotional reasons you wore a mask, reasons you felt a need to hide your true feelings from someone (or several "someones").

4.  How did you hide who you were or might become? What was the nature of your "mask?"

5. Here’s a formula for starters, which may be helpful. Remember that this to get you started if you’re not sure how to begin—you’re not bound to this in any way.

Line 2 (or more): Identify who else figures in the “story.”


Line 3 (or more): What happened to make you feel a need to hide something?


Line 5 (or more): How different are the masked you and the real you?

6. After you've worked your poem into a form that feels close to finished, give it some time away and then come back to it. Read it out loud. Edit and tune it.


When you start writing, you might consider using paragraph form. This may develop into a prose poem, or you may wish to work out lines after you’ve drafted the paragraph(s).

Link the end of the poem to the beginning but not overtly.

Leave your reader something to reflect upon.

Avoid the passive voice and "ing" endings; remove prepositional phrases whenever you can.

Remember that too many adjectives can ruin an otherwise good poem.

Point toward something broader than the obvious content of the poem.

Create a new resonance for your readers, a lit spark that doesn’t go out when the poem is “over.”


If you take a risk, make it a big one; if your poem is edgy, take it all the way to the farthest edge.

Example:  We Wear the Mask by Paul Laurence Dunbar

We wear the mask that grins and lies,
It hides our cheeks and shades our eyes,—
This debt we pay to human guile;
With torn and bleeding hearts we smile,
And mouth with myriad subtleties.

Why should the world be over-wise,
In counting all our tears and sighs?
Nay, let them only see us, while
We wear the mask.

We smile, but, O great Christ, our cries
To thee from tortured souls arise.
We sing, but oh the clay is vile
Beneath our feet, and long the mile;
But let the world dream otherwise,
We wear the mask!