In the spirit of the season, I thought you might enjoy
some of the fun we've had at the Carriage House Poetry Series's
annual Halloween readings.

Have a safe and happy Halloween, filled with lots of treats
and no tricks! 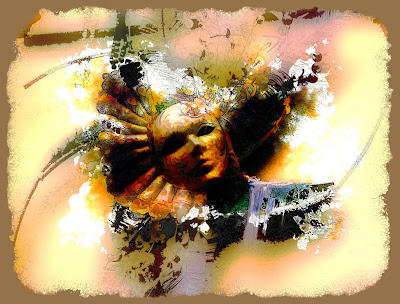 A while back, I posted a prompt about wearing masks. With Halloween just around the corner, this seems a great time to revisit that idea and to write about masks, both literal and metaphorical. Anyone who has dressed up for Halloween knows how transforming masks can be, how they provide a sense of escape, and how they offer a freeing quality that allows you to be someone other than yourself or, perhaps, to be who you really are.

In literature, the persona poem derives from a Greek word that means “mask” and is a poem in which the poet figuratively dons a mask and writes from the fictional “I” of another viewpoint. This prompt, however, goes in a different direction. For our poetic purposes, let’s consider the kinds of masks we wear and why we wear them. (Remember: masks may be anything that disguises or conceals—physical features, facial expressions, attitudes, and behaviors).