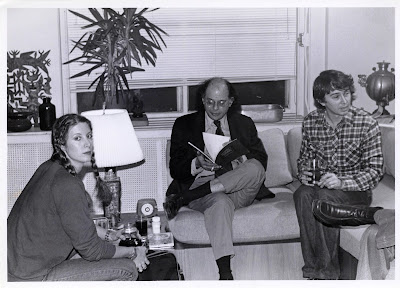 (Photo Courtesy of Charles DeFanti)
Have you ever noticed how great poems communicate much more than the sum of their words? This is precisely what makes them great. Poems, however, easily become flabby (more bulk than bone) when they're cluttered with too many words and too many details.
In poetry, condensing and compression are about making poems more compact, less wordy. They are skills that enable poets to use the fewest possible words and to extend beyond literal understanding into nuances and associations that offer deeper meanings. In poetry, less really is more. As Dylan Thomas wrote, "The best craftsmanship always leaves holes and gaps ... so that something not in the poem can creep, crawl, flash or thunder in." Those holes and gaps can't happen in an overwritten poem.
In planning this week's prompt, I came across an interesting article and an idea to boost awareness of condensing and compression in our poems. From the article (Click Here to Read It): "Allen Ginsberg was a full believer in condense, condense, condense – which is a Pound dictum..."
The article continues (and this is what caught my attention), "Check Allen's poetry for articles (remember "a," "an," "the"?) and you'll see where he starts – these bitty words all but disappear in his work, which not only condenses but gives a rushing sense of immediacy to his work." The article goes on to discuss Ginsberg's reaction to haiku, a genre that I credit with teaching me much about condensing and compression. Ginsberg's answer to haiku first appeared in his book Cosmopolitan Greetings in the form he called "American Sentences." According to Ginsberg, an American Sentence is simply one sentence that contains seventeen syllables (the writing of which is a great way to focus on condensing and compression).
So here goes – our prompt this week is to create American Sentences in the manner of Allen Ginsberg, and then to look at our already-written poems with an eye toward condensing and compressing them.


Before you begin, be sure to read some American Sentences
http://www.americansentences.org/american-sentences.html.
Part I
1. Pick 3-5 topics.
2. Write an American Sentence on each topic you chose (have fun with this and be aware of how you condense  and compress).
Part II
1. After you've written a few American Sentences, take a look at some of your already-written poems. Think about how you might condense and compress to improve them.
2. Are there unnecessary prepositions that you can lose?
3. Are there articles (a, an, the) that you don't need?
4. Are there conjunctions (and, but, although, when, while, yet, because, for, until, etc.) that your poems can live without?
5. Do you include more details than necessary? Do you "tell" with words rather than "show" with effective imagery?
6. How can you condense and compress to create greater immediacy, energy, and power?
Share |
Posted by ADELE KENNY at 8:20 AM