Poetry Prompt #56 - The Way Things Were 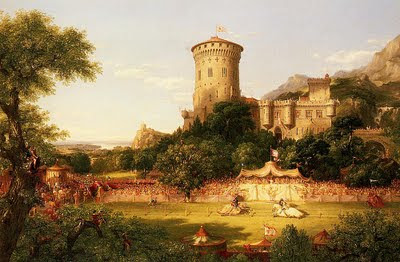 Do you miss the way things used to be? Are there yesterday-elements that you wish were still part of your life? This prompt deals with the way things were. Think about things like your childhood, your hometown, your country, the world, seasons past, school days, family life, advancements in technologies, relationships – anything "then" – and write a poem about something you miss. (Pay attention to details but be careful not to overdo.)
Sample Poems about the way things were:
"The Past" by Michael Ryan
"Summer Past" by John Gray
"A Room in the Past" by Ted Kooser
"Crossroads in the Past" by John Ashbery
"Things of the Past" by Theodore Weiss
"A Time Past" by Denise Levertov
"An Image from a Past Life" by William Butler Yeats

Now for the writing ...
1. Try to write a poem using a compare and contrast format in which you use alternate lines to weigh the past against the present. (Use "Then I" and "Now I" to start every other line; or, you might want to work with other phraseology, for example, “Back then I _______,” or “There was a time when I _____.”)
Then I ____________________
Now I ____________________
Then I ____________________
Now I ____________________
After drafting this “form” poem, you may want to edit to create something less predictable. Form poems can be great to get your engine started, but too much form can make a poem tedious. Remember that a poem can be consciously led for a while but ultimately needs to lead the poet.
2. Alternatively, you might write a list poem in which you list things from the past that you miss. Be sure to work with your list to diminish the obviousness of a simple inventory. Use some enjambments and include details. Bringing a list poem to closure can be a challenge. After creating your list, work on a “dismount” with a bit of punch.
Example:
Then
It was all carousels and cotton candy –
long summer days, and light that lasted.
It was my mother’s voice calling me home
at the end of a day when even the dark was
friendly and warm. It was then – each hour
long, and filled with little more than the
distant promise of (someday) growing up.
3. Another option for this prompt is to write a poem to or about someone who is no longer part of your life but who was once very important to you. You might want to start with a compare and contrast format.
We used to be ____________________,
but now ____________________ .
As with prompt option #1, be careful of predictability – draft first and then work to make the form uniquely your own.
4. And here’s one more: Are there things you might have done in the past (could have/should have) that impacted the way things are now? Write a poem about things you should have, might have, could  have done in the past.
Note: By way of sharing, please visit "East Rahway" by Adele Kenny, one of my own poems about the way things were.
Share |
Posted by ADELE KENNY at 7:12 AM