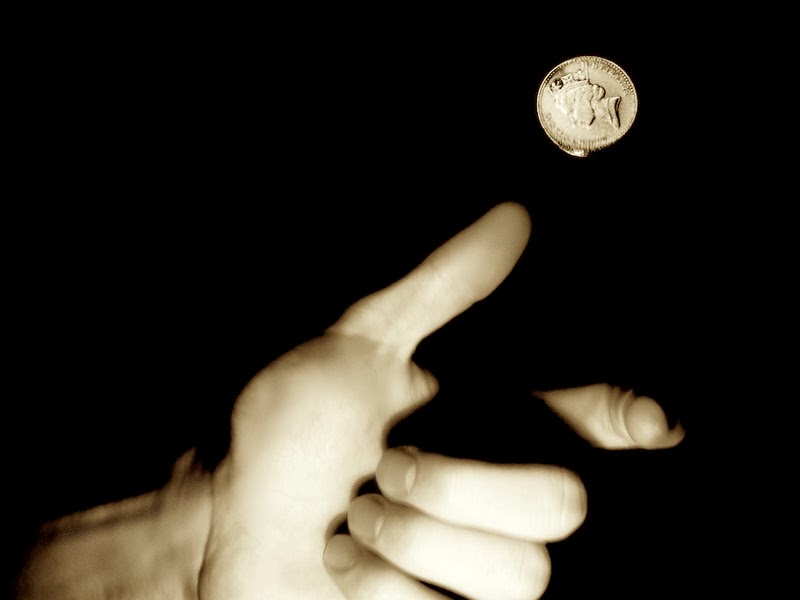 The pseudophilosophical term “Flipism” refers to making all decisions by simply flipping a coin (an idea expressed in a circa 1953 Disney comic called “Flip Decision.”) Although Flippism may be viewed as a normative decision theory, delegation to an external device (the coin) and leaving decision-making to something so random may work best in situations where a decision deadlock occurs, when one deliberately avoids making a decision, or when the decision-alternatives appear equivalent. I’m sure we’ve all experienced the kind of backing and forthing that can accompany decision-making, but I don’t suppose many of us leave major decisions to the flip of a coin. The idea, however, has definite creative possibilities.

This week, I’d like you to be entirely creative; that is, don’t write from memory or experience but, rather, make up a situation in which you can’t come to a decision and flip a coin to determine an outcome.

1. Casting a vote
2. Accept or not accept a job offer
3. To date or not to date
4. Choosing a spouse
5. Picking a kitten or puppy
6. Naming a child
7. Heads you love me, tails you don’t
8. Flipping a coin and finding that it has the same face on both sides
Tips:

1. Write in the first person.
2. Don’t be afraid to experiment—step outside of the box.
3. Consider a humorous approach.
4. Avoid clichés and unnecessary words and phrases (make every word count).
5. Subvert the ordinary—“see” things in extraordinary ways; take the ordinary and turn it upside down. Dislodge the obvious.
6. Think in terms of what you experience through your senses (concrete words); avoid abstract words that relate to concepts or feelings.
7. Of course, if none of these ideas strikes your poetic fancy, you might like to write about decision-making, a challenging decision you’ve had to make, or anything about flipping a coin.

A Psychological Tip
By Piet Hein

Whenever you're called on to make up your mind.
And you're hampered by not having any.
The simplest way to solve the dilemma you'll find,
Is simply by flipping a penny.

No, not so that chance shall decide the affair;
As you're passively standing there moping.
But as soon as the penny is up in the air,
You'll suddenly know what you're hoping.

Email ThisBlogThis!Share to TwitterShare to FacebookShare to Pinterest
Labels: Flip of the Coin Poetry Prompt, The Music In It Poetry Blog