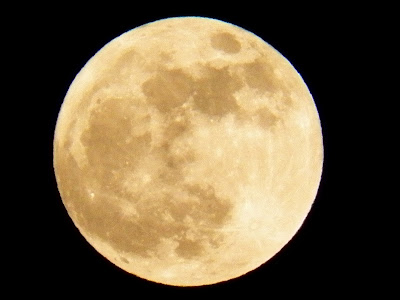 Writing poems about the moon is probably as old as written language and might seem a bit “done.” However, inspired by Midsummer Night on the 21st, immediately followed by a “supermoon,” I thought it might be interesting to have a go at “lunar” poems this week—not the typical or expected fare but, rather, moon poems that speak to the ways in which we can take a familiar theme and make it “new.”

The goal this week is to approach the moon from a fresh perspective, with memorable ideas and images that startle (and, hopefully, delight) your readers. Be aware that your poem should address the actual subject and should contain a deeper meaning as well. Remember that really good poems often contain the shock of discovery—something life-illuminating that happens when you write and when your poem is read.

Some Ideas to Consider:

1. A honeymoon (a get-away taken by a man and a woman immediately after their marriage).

2. Moonshine whiskey (illegal liquor, made by a “moonshiner” in a secret still).

3. An eclipse of the moon (when the moon appears darkened as it passes through the earth’s shadow).

4. Being moonstruck (so in love that one cannot think clearly or behave normally).

5. A mooncalf  (a pejorative used to suggest that someone is stupid, a blockhead, a fool, or otherwise not very intelligent).

6. Being “over the moon” (extremely delighted about something).

7. “Shooting for the moon” (being highly ambitious).

9. “Once in a blue moon” (something that happens very rarely).

11. “Moonlighting” (in the US, having a night job in addition to day-time employment—in Australia, riding after cattle at night—in the UK, illegal work—and in Ireland, once used to describe violence carried out at night).

12. The famous line from the old Honeymooners show in which Ralph Cramden (Jackie Gleason) says to his wife, “To the moon, Alice!”

14. The old silliness about the moon being made of green cheese.

15.  The old fad for “mooning” (referring to a bare, moon-like posterior displayed to passersby).

Email ThisBlogThis!Share to TwitterShare to FacebookShare to Pinterest
Labels: Moon Poems, Poems about the Moon, Poetry Prompt, The Music In It Poetry Blog