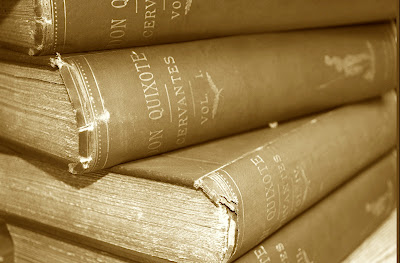 I recently found an old edition of Don Quixote on one of my book shelves and spent some time thinking about the title character as an icon for idealism and the ways in which we pursue our personal notions of the ideal. Quixotism is typically defined as a visionary action in which the quixotic person seeks truth, justice, or beauty with an internal vision so clear that it “sees” through the illusions of exterior experiences. It is also defined as “impractical pursuit of ideals.” Impulsive people, spontaneous people, idealists, dreamers, and romantics are considered quixotic. If you’re not familiar with the book by Cervantes, you can read a brief summary at  the following website:
http://www.bookdrum.com/books/don-quixote/9780140449099/summary.html.

There are, of course, complexities in Cervantes’s novel, as well as multiple interpretations, that we needn’t address here, but I thought that this week we might look at times in our lives when we’ve been led by visionary ideals, impulses, spontaneity, or romantic notions. I’m reminded here of a time many years ago when I was driving to work and saw and elderly lady trip and fall on the sidewalk. I pulled over to the side of the road and ran back to help her. With a lot more strength that I could have imagined, she threw a punch that connected with my arm and then shouted that if I didn’t leave she’d scream for help. I didn’t want to leave her sitting there on the sidewalk (and those were the days before cell phones), so I hesitated, and she started to scream. In fact, she got up and began to chase me down the street. I suspected that she must be embarrassed by the fall, but she was definitely not as red-faced as I was. So much for being “heroic.” I like to think I did the right thing, even though it made me late for work and cost me a bruise on the arm.

Things To Think About:

1. Has there ever been a time when you tried to act as a “knight in shinning armor” but were rejected? What “ideal” inspired you? How did the rejection make you feel?

2. Has there been a time when you were “foolishly impractical?” Where did it lead you?

3. Don Quixote “tilted at windmills,” seeing them as giants who threatened people. The expression “tilting at windmills” has become an English language idiom that means attacking imaginary or unbeatable enemies (“tilting” refers to jousting or, more generally, to engaging in combat). Is there a metaphorical windmill at which you’ve tilted? Has there ever been a concern or issue in your life that you later learned was inconsequential despite your fear of it?

4. In 1644, John Cleveland published in his London diurnall, “The Quixotes of this age fight the windmills of their owne [sic] heads.” Can you relate that to something personal or perhaps something in current society or politics? Have you ever fought a symbolic windmill “in your own head?”

5. “Tilting at windmills” has also come to mean trying to fight battles that can’t be won. Has there been such a “battle” in your life? Keep in mind that the larger question is not failure but, more importantly, how your actions affirmed a higher quality of character.

6. When it first appeared in print, Don Quixote was considered a comic novel; by the nineteenth century, it was considered a social commentary; and it later came to be called a tragedy. In keeping with the lighter (comic) interpretations, can you write a narrative poem in which you tell the story of a funny time you were idealistic, romantic, or heroic?

7. Is there something appealing about an idealistic Don Quixote-kind of figure to you? What specifically? Why? How are you like Don Quixote?


8. Do you remember a song titled “The Impossible Dream” from the play and movie The Man of La Mancha (based on the Cervantes novel)? To hear it, click on the arrow below. Now ...  do you have (or have you ever had) an “impossible dream?”


1. Be sure to write in an authentic voice—the way you “say” things is critical to a poem’s success. Your attitude toward the content is definitely part of the content, and your language should be imaginative, unique, and distinctive. Don’t simply tell a story—that would be prose.

2. Be wary of including so many details that your poem becomes cluttered. You want to hold your readers’ attention, not lose them in superfluous particulars.