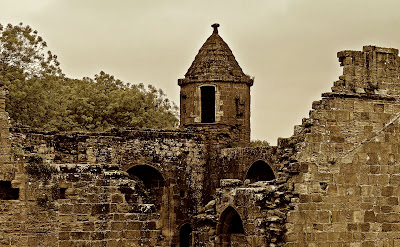 I’ve always loved mystery novels—the thrill of suspense and the challenge of trying to figure out “whodunit” have never failed to capture my imagination. I’ve also had a long-time interest in the  unexplained (Bigfoot, the Loch Ness Monster, the Shroud of Turin, Crop Circles) and unsolved historical mysteries/crimes such as the truth behind the deaths of England’s Little Princes and the identity of Victorian England’s notorious Jack the Ripper. There’s a sense of intellectual challenge, as well as a sense of fun that goes with the intrigue of mystery-solving. There’s also a bit of fear and spine tingling in some mysteries—something compelling about a dark road, a cemetery at midnight, and an abandoned house. In addition, catching a glimpse of a world beyond that in which we live is an intriguing possibility.

The “Gothic” genre in British literature, which began during the mid-eighteenth century with Horace Walpole’s novel The Castle of Otranto, combined elements of mystery, horror, and romance (Gothic author Ann Radcliffe added detail to the genre and became the most popular and best-paid novelist of her time). The Romantic Movement of the late eighteenth and early nineteenth centuries prompted exploration of mysterious themes in literature as writers of the time explored the hidden worlds within and beyond human emotions. Supernatural elements were prevalent in Keats’s poems (e.g., “La Belle Dame Sans Merci” and “The Eve of St. Agnes”), in Lord Byron’s works (e.g., “The Giaour,” a vampire poem), and an interest in the supernatural appears repeatedly in Shelley’s poems (e.g., “Hymn to Intellectual Beauty” and “Mont Blanc”). In William Blake’s Songs of Innocence, angels visit a poor chimney sweep. The mystery genre in American literature is generally agreed to have come into its own through Edgar Allan Poe during the 1840s. His poem “The Raven” is one of the best-known poems in the “mysterious literature” canon.

You can see where I'm going with this, right? This week, let's write about something mysterious.

Things to Think About Before Writing:

Has something mysterious happened to you? Something that has never been explained?

Have you ever had a paranormal experience? Have you seen or heard something ghostly or of another world such as a UFO?

Is there an unsolved mystery that interests you?

Is there something mysterious in the natural world that fascinates you?

Is there a mysterious place to which you’ve traveled or would like to travel?

Is there anything “mysterious” about your emotions, an emotional reaction you’ve had, an emotional attachment that makes little sense?

Remember the old story starter “It was a dark, rainy night, and I was alone?” How about writing a poem that’s entirely creative and not based on an actual experience: you’re driving alone on a dark road; perhaps it’s raining; there may be thunder and lightning. Where are you going? What happens?(Create a “mysterious” scenario.)

Don’t confuse “mystery” and “obscurity.” A mysterious poem is far more likely to succeed than an obscure one.

Be sure to invite the reader into your poem with a great first line.

Create a sense and tone of mystery through language.

Your poem should make the reader “see” the “world” in a new and exciting way. At the same time, you should find some insight that you weren't aware of before.

Try to create at least one image that will leave the reader astonished, startled, and maybe even a bit breathless.

"Mysteries Remain" by Hilda Doolittle (HD)
"Seven Mysteries" by Michael Jackson
"The Ghost" by Charles Baudelaire
"He Posits Certain Mysteries" by Thomas P. Lynch
"How Can It Be I Am No Longer I" by Lucie Brock-Broido
"Haunted" by Naomi Shihab Nye
"Letter from a Haunted Room" by Lisa Sewell
"The Haunted Palace" by Edgar Allan Poe
"Haunted Houses" by Henry Wadsworth Longfellow
"The Haunting" by Alan Shapiro