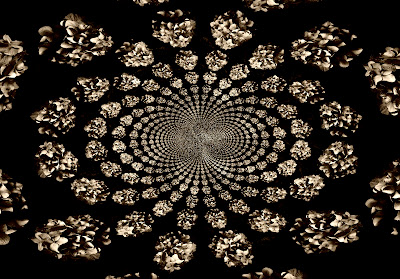 Our days are a kaleidoscope. Every instant a change takes place. New harmonies, new contrasts, new combinations of every sort. The most familiar people stand each moment in some new relation to each other, to their work, to surrounding objects.

While recently “playing” with an online photo program, I changed a simple photo of hydrangeas in my yard to the image above. It reminded me of a cardboard kaleidoscope that I had as a child and how much I enjoyed that tube-shaped toy – an optical instrument, part of which I turned by hand to produce the most amazing symmetrical designs through mirrors and pieces of colored glass at the end of the tube. Over the years, I’ve heard the word “kaleidoscope” used as a metaphor for changing colors, for changing events, for the ways in which we look at things, the ways in which our perspectives can change, and for life itself. I’ve heard terms such as “a kaleidoscope of illusions” and a “kaleidoscope of dreams.”

Best-selling novelist Danielle Stelle, also a poet, opened her novel Kaleidoscope with a poem of the same title; in James Joyce’s Finnegan’s Wake, the kaleidoscope is a metaphor that speaks of change or disruption; Lewis Carroll’s Through the Looking Glass has been called “a kaleidoscope of English history;” and the Beatles described Lucy in the Sky as a "girl with kaleidoscope eyes."

You can see where I’m going with this, right? Your challenge this week is to include the word “kaleidoscope” in a poem as imagery or as a metaphor. The obvious poem would be one in which “kaleidoscope” is a metaphor for life. If you choose that approach, be sure to avoid clichés and work toward language and ideas that are fresh and unique. Another option is to include a single kaleidoscope reference (see the example poems below). You might even write about a kaleidoscope you had as a child.

Things to Think About:

FYI: The kaleidoscope was invented in 1815 by Scotsman Sir David Brewster (1781-1868) during experiments with light polarizations. Brewster's name for his invention was derived from the Greek (kalos or beautiful, eidos or form, and scopos or watcher), thus meaning "beautiful form watcher." A patent was obtained two years later, and the original scientific tool was later copied as a popular toy. Brewster hoped to make money on his invention, but a loophole in the patent wording allowed others to copy his design. During the Victorian Era, kaleidoscopes were popular parlor "toys," and both old tin and cardboard kaleidoscopes remain collectible.

Email ThisBlogThis!Share to TwitterShare to FacebookShare to Pinterest
Labels: Kaleidoscope as Metaphor, Kaleidoscope Poems, Poetry Prompt, The Music In It Poetry Blog