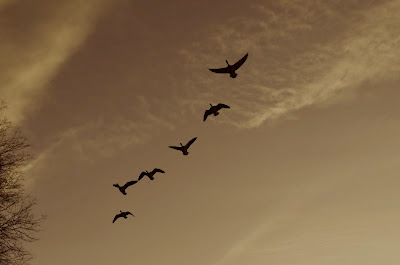 As summer winds down and we begin the month of September, autumn migrations – heralds of cooler air and bright colors – begin in my corner of the world. Many years ago, back in the days when I was active in the haiku community, I wrote a poem about migrating geese, which later became the title poem of a haiku collection. The poem was honored with a first place Henderson Award in 1984, and the book won the first place Merit Book Award for 1987.

migrating geese –
once there was so much
to say


I haven’t thought of the poem or the book in years, but I did yesterday when a flock of geese, apparently in a pattern of early migration, flew above my back yard just as dusk began to settle. I thought then about that little poem and how it linked the seasonal migration of geese (nature) to the way a relationship had changed (human nature). It occurred to me that there are times in all of our lives when we find ourselves in a process of migration (not merely physical migration, but movement from one spiritual place to another, from one emotional place to another, from one relationship to another).

1. Begin with a freewrite and then look over what you’ve written to see which ideas you can work into a poem.

2. Try to incorporate some nature imagery.

4. Write a persona poem from the perspective of a migrating bird, butterfly, or animal.

5. Try using “What The Wild Geese Know" as a title or theme.

7. If writing about a personal “migration” doesn’t come together for you, write about a bird, butterfly, or animal migration. (You might even try an immigration poem.)

Most importantly, think about the rich potential in migration for metaphor, imagery, and figurative language; go beyond the obvious; give your poem room to discover what lies behind its conscious subject – "migrate" beyond your poem's surface content to create layers of meaning!