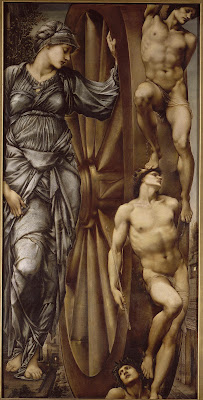 Luck is defined as a “force that brings good or bad.” In ancient times, the Greeks and Romans worshiped luck through the goddesses Tyche (Greek) and Fortuna (Roman); and in Norse folklore, both the acorn and the oak tree were good luck symbols.
The Consolation of Philosophy, a 6th century work by Boethius, was one of the most extensively studied texts of the Middle Ages. Both King Alfred and Queen Elizabeth I presided over translations of it, and it would be hard to overvalue its significance in medieval thought. The best-known symbol associated with Fortune, the central figure of the Consolation, is the wheel. During the Victorian Era, Pre-Raphaelite painter Edward Burne-Jones created his interpretation in “The Wheel of Fortune” seen above (click on image for larger view); in this painting, a giant wheel turned by Fortune features three figures – a king, a poet, and a slave.
Most cultures have signs and symbols for good luck; for example, “Fu” is the Chinese symbol for luck and is often worn or displayed (Fu Symbol). The elephant god Ganesha is the Hindu god of luck, and Feng Shui practitioners believe that elephant figurines with their trunks up in a home will bring good fortune and strength. Other traditional good luck symbols include such “charms” as rabbits’ feet (not so lucky for the rabbits), horseshoes, and four-leaf clovers. In addition, some days are considered lucky while Friday the Thirteenth is feared as a day of possible misfortune.
Interestingly, there is good luck and there is bad luck, but a blessing is always good. A blessing is a gift, often undeserved or unasked for – something hoped for, associated with love and with God, and not defined by trivial things. You can have good luck in a casino, but a blessing is more than good luck; and, while luck is random, blessings are more personal.
This week’s poem (yes, you guessed it) will be about blessings or luck. You may use an anecdotal format, write a prose poem, or experiment with any form that appeals to you. Your tone may range from seriously theological to insanely silly.
Starter Questions:
1. Has there been a time in your life when you were the recipient of especially good luck? What’s the best “luck” you’ve ever had? What’s the worst?
2. When have you felt especially blessed? Has your prayer for something or for someone been blessed with the outcome for which you prayed?
3. How do you feel about “lucky charms?” Do you have a particular “lucky charm?”
4. Have you ever won big in a casino or in another “game of chance” venue? What’s your wheel of fortune?
5. Have you ever had your fortune told?
6. What does this quote mean to you: “Being deeply learned and skilled, being well trained and using well spoken words; this is good luck” (Hindu Prince Gautama Siddharta, the founder of Buddhism, 563-483 B.C.)?
7. How might you use a “throw of the dice” as a metaphor or extended metaphor in a poem?
8. How might you reflect upon and write about blessings using these words of Charles Dickens for inspiration: “Reflect upon your present blessings of which every man has many – not on your past misfortunes, of which all men have some.
Example Poems:
"Lucky Life" by Gerald Stern
"A Blessing" by James Wright
"Luck is Not Chance (1350)" by Emily Dickinson
"Lucky" by Tony Hoagland
"Near Misses" by Laura Kasichke
"Blessing the Boats" by Lucille Clifton
"The Blessed" by William Butler Yeats
Share |
Posted by ADELE KENNY at 8:01 AM

Email ThisBlogThis!Share to TwitterShare to FacebookShare to Pinterest
Labels: Blessings and Luck Poems, Poetry Prompt, The Music In It Poetry Blog