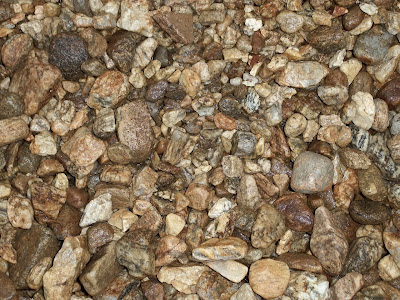 When I was a little girl, I loved stones – I collected them, skipped them across the creek, and sat on a large stone in my backyard to write poems. Later in life, I created a stone circle in my garden with a fountain in the center, ringed my flowerbeds with stones, and created stone walkways in different parts of the yard. I can't say that I ever consciously thought much about stones, and I wasn’t aware that stone imagery figured strongly in my newest poetry collection (What Matters) until a reviewer pointed it out. After reading the review, I looked at the poems and realized that the reviewer was right – there is a fair amount of stone imagery. My use of stones was organic, not deliberate, but I found it interesting to re-read those poems much after they were written and to think about “stones” as image and metaphor. As the reviewer pointed out, stones, pebbles, rocks and other such seemingly solid and permanent objects, suggest a way to anchor ourselves in this world. Stones can carry numerous suggestions and meanings. What do they suggest to you? This week, try using “stones” as your inspiration word and write a poem based on stones or in which stones are part of the imagery.
Sample Stone Poems:
"Stone" by Charles Simic
"Poem For A Birthday - The Stones" by Sylvia Plath
"Stones of the River" by Anne Sexton
"Little Stones at My Window" by Mario Benedetti
"Black Stone Lying on a White Stone" by Cesar Vallejo
"Stone Bird" by Pattiann Rogers
"The Rosetta Stone for Birdcalls" by Peter O'Leary
Ideas to Consider before Writing:
1. Has anyone ever thrown a metaphorical stone at you? A real stone?
2. What does this familiar saying mean to you and how might you use it in a poem: “People who live in glass houses shouldn’t throw stones?”
3. Did you ever skip stones in a pond or creek when you were a child?
4. How are the troubles in your life like stones?
5. Can you work this New Testament Scripture passage into a poem: “Let anyone among you who is without sin be the first to throw a stone ….” John 8:7 NRSV
6. It has long been a custom in Judaism to place a stone on the grave marker of a loved one to signify that the deceased person’s memory has been honored with a visit to the grave – the deceased has not been forgotten. (There’s a lovely example of this at the end of the movie Schindler’s List.) Can you work this custom into a poem?
7. Reflect on this old adage as the inspiration for a poem: “A rolling stone gathers no moss.”
8. You’ll probably remember this childhood nursery rhyme “Sticks and stones can break my bones, but names will never hurt me” that encourages a child who’s been called names to ignore the ridicule and to show a stronger character than the name-caller. Has name-calling ever hurt you? How did you handle it?
9. What special “steppingstone” has been helpful to you at some point in your life?
10. What “something” in your life was just a “stone’s throw away?”
11. Worry stones are smooth, polished gemstones, usually oval-shaped, and sometimes with a thumb-sized indentation. Holding a worry stone between the thumb and index finger and rubbing it is said to have a calming effect. In Irish folklore, rubbing a worry stone crafted from Connemara marble is said to relieve worries and bring luck. Some people hold a worry stone during meditation to help center concentration. How about a worry stone poem?
12. What can a stone (or stones) symbolize in a poem? What’s your best stone metaphor?
13. Statues are made of stone – how about an ekphrastic poem based on a piece of stone sculpture? (Think Venus De Milo, Rodin's The Thinker or The Kiss, The Sphinx, Michelangelo's Pieta,  The Tian Tan Buddha in Hong Kong, The Fountain of Trevi in Rome. Here's an example by Rainer Maria Rilke:  "Archaic Torso of Apollo."
14. When we think of ruins, we usually think of crumbling stone walls or broken statuary. Have you ever visited historical ruins? Ancient temple remains in Egypt or Greece? A fallen cathedral? Cities like Pompeii?  Stonehenge in England? Chichen Itza or Machu Picchu? The bombed out ruins of a war site? Is there a ruin poem that you might write? Here's an example: "in the ruins" by Mark Conway.
Share |
Posted by ADELE KENNY at 8:33 AM