What Do You Do (After a Book is Completed)? 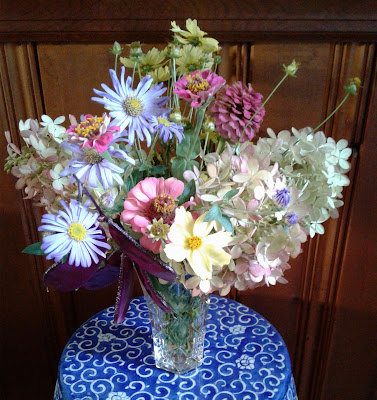 Welcome back to “The Music In It!”
I hope you all had relaxing and peaceful summers!
The post that follows is one that reflects a number of voices—
those of poets whose work I especially respect and admire.
I hope you enjoy their comments.

About a year ago, I finished a new collection of poems. A hard copy of the manuscript sat on my desk for at least twelve months. Every time I opened it, I found something else I wanted to change. After months of making changes, I let the manuscript sit for while and didn't open it at all. Nor did I write. When I finally looked at the manuscript again, I made more changes; and only when I began to feel I was over-editing, did I decide that the collection was done.
I finally sent the manuscript out, and I'm happy to share with you that it was accepted by the publisher who published my two previous books. It will be a few months before the book is in print, and I've been thinking about the time it takes to write a book. Yep, thinking about, but not writing poetry.

It’s a fact that I every time I finish a poetry manuscript, I stop writing poems for a while. It doesn’t feel like a big-sigh-of-relief-and-now-I’m-going-to-take-a-break. It isn’t something conscious, and it certainly isn’t something I choose. I do write reviews and nonfiction articles, anything but poetry. It’s a strange process—one that I can’t explain—and it takes several months (sometimes longer) before I get back into writing poems again.

I've always said the my muse is fickle—she vacations in the south of France, takes three martini lunches, and usually only shows up when I'm busy with a thousand other things. Apparently a finished manuscript is a ticket to ride for her because she cheerfully deserts me for long periods of time after I complete a book.

I’ve been wondering what it’s like for other poets. Do they finish one manuscript and keep on writing poems, begin a new manuscript, send the completed manuscript out right away or let it sit and “mature?” Here are some related comments from ten of my favorite poet friends.

My first book of poetry was published when I was 43 and in the 27 years since I have only written three more full length collections. Unlike some of my poet friends, I am not at all prolific so to actually have a book completed is a very big deal for me.

Usually a few specific poems that I might have received especially positive feedback on will spur me to take a look at my body of work since my last book to determine if I might have a viable manuscript for a new full length volume.  Once a poem has been published in a journal I usually don’t make any changes so in putting together a possible manuscript it becomes more a question of how to organize completed poems that might have been written over a wide span of years into a coherent, unified book. That is where I rely upon an editor who can help with discerning how to order individual poems effectively. I only usually know in advance which poem I would like to be the first in the book and which poem I would like to be the last but, other than that, I have been open to suggestions from the editor at the publishing house. At Grayson Books I have been fortunate to work with Virginia Connors who has been extremely helpful in this regard.

When the book is first published I am excited of course but I also understand I then have the daunting obligation of promoting it through readings and mailings. This aspect of having a new book out has become more difficult for me as I get older because where I now live in Pennsylvania is such a long distance from most reading venues and the extended driving, especially at night, has become a challenge for me.

I haven’t had any problems in writing new poems after a book has come out but I don’t immediately consider them as automatic material for “the next book.” I know that if there will be another book it would be years away and I can think about that if and when the time comes.
—Edwin Romond