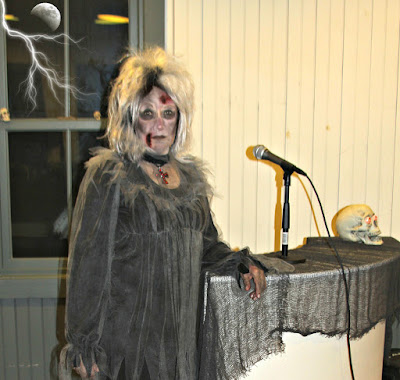 (Yep, that's me in my zombie costume.)

It’s been more than a decade since zombies began their hungry shuffle into the mainstream of popular culture; and, in the monster aristocracy, zombies are currently the reigning royals. Since establishing the Carriage House Poetry Series in 1998, I’ve tried to come up with ideas (especially on occasions like our 19th anniversary this year) that will be fun for both performers and audiences, and something other than the typical poetry reading fare.

In the spirit of the season, and with Halloween coming soon, the Carriage House Series presented a program of ghoulishly good poetry, costumes, and celebration on October 17th. We called the program “Poets’ Apocalypse,” as a play on the current popularity of zombies and the term “Zombie Apocalypse.”