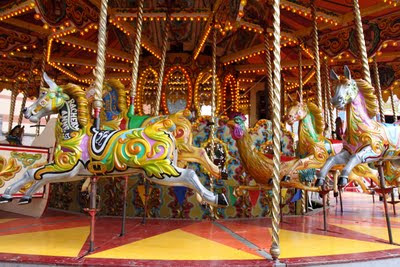 The heat here in central New Jersey has been especially oppressive with a high yesterday of 104 degrees (Fahrenheit) and a heat index of 114! There’s something about summer and hot days that always makes me think of sand and surf, amusement parks and, especially, carousels. There’s something romantic about carousels – whimsical, magical.
The earliest known representation of a carousel appears in a Byzantine bas-relief that dates to c. 500 A.D. The relief shows riders in baskets suspended from a central pole. Later, carousel was the term used for 16th century spectacles in which riders tried to spear gold rings with lances as part of court festivities. This sport ultimately replaced combative jousting and inspired the carousels that became popular in Europe by the late 1700's. In America, the glory days of the carousel or merry-go-round stretched from the 1880s into the 1920s.  Many carousels featured a device filled with plain metal rings and one or two made of brass. Grabbing a brass ring while the carousel was in motion meant that the rider was entitled to a free ride. Some interpreted that as good luck and, when I was a child, my mom and dad said that grabbing the brass ring meant a wish would be granted. 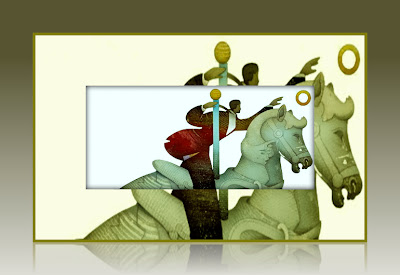 1. Imagine this: you’re riding the carousel at an amusement park or at a local fair and you reach to grab the brass ring. As your fingers touch the ring and pull it toward you, the carousel begins to spin faster and lifts into the air. As weird as this is, you aren’t afraid. In fact, you’re filled with a wonderful sense of excitement. What happens next? Write a prose poem in which you fill in the details and describe the outcome.
2. An alternative is to write about an amusement park, a side show, a freak show, or how your life is like a merry-go-round.
3. You might want to try a poem inspired by, but not necessarily about, a carousel. To see what I mean, read "Central Park, Carousel" by Meena Alexander.
4. You may even write a series of haiku, senryu, or short poems on the carousel or amusement park theme. Read Alan Pizzarelli's "Amusement Park" poems for inspiration.
5. What does the term “Carousel Dreams” suggest to you? Try writing a poem with this title. For inspiration, here’s a lovely and moving video of Verne Langdon's song ("Carousel Dreams") narrated by Jonathan Winters.
And ... just for fun, here's a video of carousel riders hoping to catch a brass ring.
Share |
Posted by ADELE KENNY at 7:21 AM