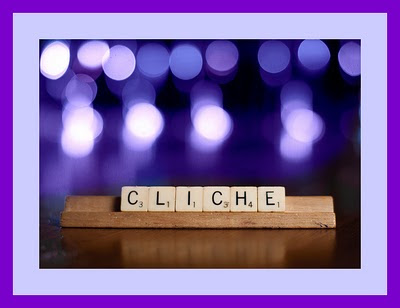 There's an old joke about a man who walks out of a theater after seeing Hamlet and says, "I don't know why everyone thinks Hamlet is such a well-written play, it's full of clichés." Of course, phrases from Hamlet such as "in my heart of hearts," in my mind's eye," and "there's the rub" weren't clichés when Shakespeare wrote them. They've become clichés because they've been quoted so extensively.
Webster's defines cliché as "a trite expression or idea" (and trite is defined as "hackneyed or boring from much use; not fresh or original"). In everyday speech, clichés become a kind of verbal shorthand. Clichés, however, require little thought and rarely evoke thought or emotion when they appear in poetry. Readers don't come to poetry looking for what they already know or have heard before. They want fresh content, distinctive perspectives, acute angles – freshness and originality.
Clichés are the worry stone of language: they may have begun sharp and well-defined but have been rubbed smooth by repeated "handling." They are generic, not specific, and poetry requires specifics.
Clichés often masquerade as similes ("dark as night," "tears like rain," "like a bat out of hell," "pale as a ghost," "fast as lightning"). They may refer to ideas ("a fluffy kitten," "a pounding heart," "sweaty palms"), and some topics invite clichés (i.e., love poems). The caveat is to avoid clichés "like the plague."
For this prompt, we're going to work with clichéd phrases for the purpose of becoming more aware of them in our writing. Click List for a list of  clichés, and click Categories for a list of clichés by category.
Here are some starters:
1. Make a list of of several clichés and then write a poem around them. You might make this a funny poem in which you accent the obvious.
2. Choose a cliché that really annoys or amuses you, and write a poem about it.
3. Choose a cliché to describe a relationship you've had, and use it as the basis for a poem.
4. Choose a well-worn cliché and re-invent it to create a new meaning; use the new meaning you've created in a poem.
5. Write a poem entirely from clichés.
Example:


He Was Just Another Cliché

To this day, I know that time
heals all wounds (all in due
time) but, needless to say, I
was having the time of my life
when the unexpected happened.
His silence was deafening, so I told
him to cut to the chase. I was scared
out of my mind. The moment lasted
an eternity – it seemed to take
forever – so long that I lost track
of time; I stopped in my tracks.
The long and short of it is this: he
left me faster than greased lightning.
My bubble burst. All that glitters
is not gold, and love is blind.
Share |
Posted by ADELE KENNY at 8:56 AM