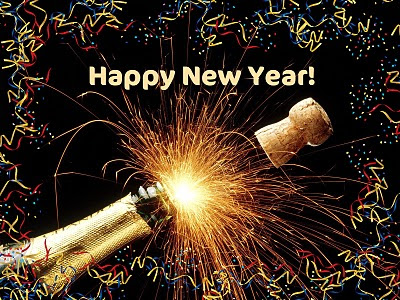 For last year's words belong to last year's language.
And next year's words await another voice.
And to make an end is to make a beginning.
(T.S. Eliot, from “Little Gidding”)
Poems for the New Year Article
"A Song for New Year's Eve" by William Cullen Bryant
"The Passing of the Year" by Robert Service
"At Entering the New Year" by Thomas Hardy
"The Old Year" by John Clare
"In the Year That's Come and Gone" by William Ernest Henley
It is believed that New Year celebrations were first observed by the Babylonians about 4000 years ago on March 23 – a time when they paid off debts, returned borrowed goods, and made resolutions for the coming year. Their practices carried over into Roman times when worshippers offered resolutions to the deity Janus (the god of beginnings and endings whose double face looked at the year behind as well as at the year ahead). When the Roman calendar was changed, the first month of the year was called "January" in honor of Janus, and January 1 became the first day of the new year. Early Christians believed that the first day of the new year should be spent reflecting on past mistakes and making resolutions to be better during the coming year. Ah, resolutions ...
Yes, I'm sure my "pre-ramble" has led you to guess that this prompt will deal with resolutions and new beginnings. Some suggestions follow.
1.  Write a poem about your resolutions for this New Year.
2. Write a poem about a resolution you tried to keep but couldn’t.
3. Write a poem about the resolution(s) you’d never make. (You might try a list poem, or you might focus on a single resolution.)
4. Write a poem filled with funny resolutions.
5. Write a poem about resolutions you’d like a friend, family member, or lover to make in regard to his or her relationship with you.
6. Write a poem about a “new beginning” that you’d like to make this year?
7. Write a poem based on the T. S. Eliot quotation above (you may want to use the quote as an epigraph).
My very best wishes to all for a New Year
filled with abundances of good health, happiness,
and all the beauty of poetry!
Share |
Posted by ADELE KENNY at 8:26 AM