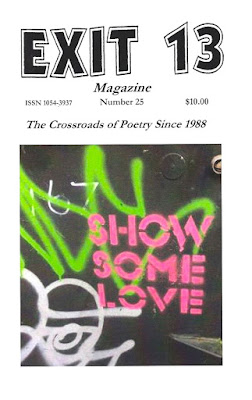 Exit 13 Magazine is well-established, internationally recognized, and annual poetry journal founded by poet and newspaper reporter Tom Plante thirty-two years ago in 1988. Based in Fanwood, New Jersey, the journal began as a “homespun magazine patched together on Plante’s kitchen table.” 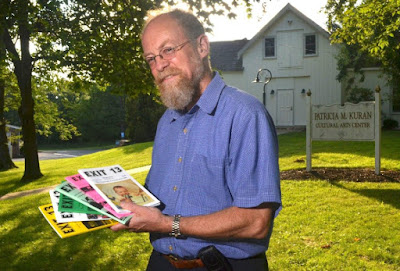 A geography major (UC Berkley), Tom’s vision for the journal has been to create a travelogue in poetry, a reflection of the world we see and a chronicle of the people and places we encounter on our individual journeys. Exit 13 focuses on contemporary poetry that celebrates exploration, discovery and testament—all with a geographic slant.

With an eye toward creating community and bringing people together during this time of distancing, Tom is generously offering a special gift to anyone interested. Right now, the recently published 2020 issue of Exit 13 Magazine (#25) will be mailed free of charge (while supplies last—after that a recent back issue will be sent). That's right: both the magazine and mailing costs will be Tom's gift to you!

To receive your free copy, please mail a note to Tom at Exit 13 Magazine, PO Box 423, Fanwood, New Jersey 07023 USA and include your proper mailing address with your request. Tom notes, “If you have other issues of Exit 13 Magazine, please tell me which one(s) you have and I won't mail a duplicate.”

the beach a frozen emptiness,

the ocean roaring alone without

lifeguard whistles and squeals of swimmers.

to watch Disney films in lavish

and cinemascope screens as wide as the sea.

in thick hooded coats and scarves, the wind

a razor across our faces as we walked the boards

to the warmth of the Criterion where we dines

to shiver in front of locked food stands and rides

their signs announcing See You Next Summer!

a promise that good ties come back

As I approach the rocky path, Crete’s

rise up. The trail is wide, uneven, slippery.

I need to step carefully. Gradually, the gorge

tightens her embrace. The path narrows, I

the shadows, uneven terrain. Just ahead, the

A warning? Stone arches ascend above, as I

squeeze through tighter passageways. A lost

goat grazes, a donkey (tied to a post), just there

for emergencies. No water flows through the

riverbed. Once voices filled the gorge, as she

Brits), allies against Hitler, who escaped

to Egypt. Only half made it to ships. But,

on this day, I am alone. The trail levels

off, then widens again into the sunlight.

Christmas Eve at the Lagan Palace

We knew that Little O’s Pizzeria

was open, as was the Lagan Palace—

on the Lower Ormeau road.

No, we didn’t eat at either.

Instead we chose to walk

along the River Lagan before

at a largely Polish Parish

and stop lights at the bridge

Back at the house after Mass

we called in an order

to the Palace and waited

our rice, cashews and chicken.

It was just us and the kids

taking a break from our jobs,

sharing the gift of our time

and stories by the fire,

A Dream of Oisín
By Adele Kenny

In Irish legend, after living three hundred years of eternal youth in Tír Na nÓg (teer-na-nogue) with the beautiful Niamh (neeve), Oisín (ush-een) longed to see Ireland again. Niamh allowed him a brief visit with one condition: if his feet touched the ground he would lose her forever and would instantly grow old. In Ireland, Oisín came across some old men who were struggling to move a huge rock. He leaned down from his horse to help them but lost his balance and fell. The moment he touched Irish soil, he immediately aged three hundred years.

How strange that tonight I dream of Oisín—tonight,
when the moon is nearly full and the autumn wind is
white in the trees. He could have lived forever,
eternally young and in love, but he longed for Ireland,

that other geography (earthly shadow, earthly light).
He knew the terms but didn’t expect to find his
people gone, the family castle fallen into itself as if
the world’s unslayable dragons had taken them all.

Above him, the Irish sky, wind-heeled and high, had
no edge and no end. Deep in the grief of so much
change, he didn’t plan for the bridle’s sudden slip,
the rapid descent into age. He had lived outside of

time and knew great love, but there is never love
without loss, and even paradise was not enough—
the terms too much to trade for the door that opens
inward—what matters most—not love but home.