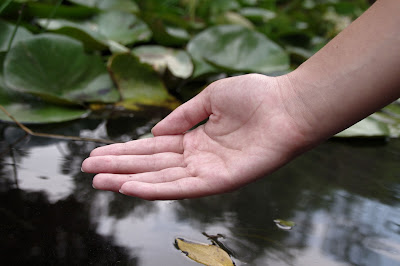 In numerology, five is a number of harmony and balance.

In the Bible, number five is a symbol of divine grace.  It is a number that symbolizes God's kindness and favor to humankind. (In Hebrew, the number five symbolizes the idea of saving, to be saved, or to be rescued.)

The Chinese believe five elements make up everything under the heavens: metal, wood, water, fire, earth.

The human body reflects the number five: we have five fingers on each hand and five toes on each foot. We also have the five senses: sight, smell, taste, touch, and hearing and thus five sensory organs: eyes, nose, tongue, skin, and ears.

The five plagues of Egypt were: floods, grasshoppers, lice, frogs, and blood.

1. Take yourself to place in which you can relax (your den, your bedroom, your front porch, your backyard, near a lake or stream, the woods, a park).

2. Once you’re settled and comfortable, look around carefully. Notice things (objects, trees, plants, water, stones, etc.) around you and write down five things that capture your attention (and, hopefully, your imagination). You might select five things that are similar or the same (five flowers, five pens or pencils, five windows, five pieces of paper, five books, five people walking by).

4. Then write a poem that’s based on, about, or that includes the five things you selected. Look for connections among the five "things" you've chosen and yourself. How do they "speak" to you? What story might they tell?

5. Let your environment become the “landscape” of the poem. Write in the present tense – here and now. Let the objects direct the content of your poem. Describe them, define them, contextualize them, analyze them, repurpose them, recreate them. Play on the number “five.” Let your poem take you where it wants to go, but don’t let your five “things” get lost.

6. Once you’ve completed a draft, take a break.  Five minutes, five hours, five days. Then go back to your poem and begin the process of editing and revising.

A Poem Based on the Number Five:

Among the rain
and lights
I saw the figure 5
in gold
on a red
firetruck
moving
tense
unheeded
to gong clangs
siren howls
and wheels rumbling
through the dark city.

Email ThisBlogThis!Share to TwitterShare to FacebookShare to Pinterest
Labels: Adele Kenny, Poetry Prompt, The Music In It Poetry Blog, Writing Poems about the Number Five