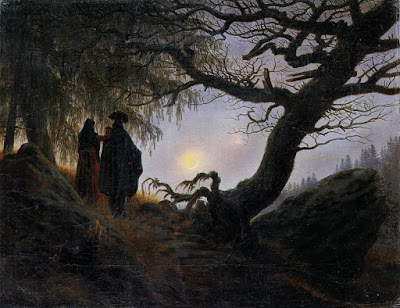 For this prompt, reflect upon the painting above (Man and Woman Contemplating the Moon by Caspar David Friedrich) and think about moonlight—its properties, its effects, how it creates mood, and how it can transform a landscape.

1. Make a list of things that moonlight can do. Describe moonlight.

2. Consider some words from the word bank below. Do any stir your imagination? If so, use them in your poem!
3. Either write an ekphrastic poem based on Friedrich’s painting or about something in your personal experience that the painting calls to mind.

4. Make sure that you create a mood in your poem that is rooted in the “idea” of moonlight.

Do: Link the end of the poem to the beginning but not overtly—and don’t over-write.

Do: Try (minimal) repetition from one part of your poem to another—sometimes this can work very well.

Do: Leave your reader something to reflect upon.

Do: Point toward something broader than the body of the poem.

The double moon, one on the high back drop of the west, one
on the curve of the river face,
The sky moon of fire and the river moon of water, I am taking these home in a basket,
hung on an elbow, such a teeny weeny elbow, in my head.
I saw them last night, a cradle moon, two horns of a moon, such an early
hopeful moon, such a child’s moon for all young hearts to make a picture of.
The river—I remember this like a picture—the river was the upper twist of a
written question mark.
I know now it takes many many years to write a river, a twist of water asking
a question.
And white stars moved when the moon moved, and one red star kept
burning, and the Big Dipper was almost overhead

Once upon a time there was a person
He was walking along
He met the full burning moon
Rolling slowly towards him
Crushing the stones and houses by the wayside.
She shut his eyes from the glare.
He drew his dagger
And stabbed and stabbed and stabbed.
The cry that quit the moon's wounds
Circled the earth.
The moon shrank, like a punctured airship,
Shrank, shrank, smaller, smaller,
Till it was nothing
But a silk handkerchief, torn,
And wet as tears.
The person picked it up. He walked on
Into moonless night
Carrying his strange trophy.

A Journey Through The Moonlight by Russell Edson

In sleep when an old man's body is no longer
aware of his boundaries, and lies flattened by
gravity like a mere of wax in its bed . . . It drips
down to the floor and moves there like a tear down a
cheek . . . Under the back door into the silver meadow,
like a pool of sperm, frosty under the moon, as if in
his first nature, boneless and absurd.

The moon lifts him up into its white field, a cloud
shaped like an old man, porous with stars.

He floats through high dark branches, a corpse tangled
in a tree on a river.

Email ThisBlogThis!Share to TwitterShare to FacebookShare to Pinterest
Labels: Adele Kenny, Moonlight Poetry Prompt, The Music In It Poetry Blog