Prompt #300 – The Night Before Christmas Parody 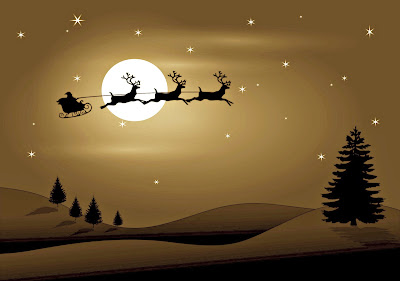 This week, I decided to revisit (and embellish) a seasonal prompt from December 11, 2010. The prompt deals with writing parodies of a well-known poem. Parody is always fun—the imitation of another work, writer, or genre. In poetry, parody is often about burlesquing serious verse for comic or satirical effect. This week, the idea is to write parodies of Clement C. Moore’s famous poem “The Night Before Christmas” (originally titled “A Visit from Saint Nicholas”).

This poem has delighted both children and adults for many years—and some very funny parodies have been written. These humorous riffs on the Christmas classic are in many ways as entertaining as the original.

The original version of “A Visit from St. Nicholas” was anonymously published shortly before Christmas in 1823. As the poem’s popularity grew, several writers claimed to be its author, including Clement Clarke Moore, a classics professor, writer, and friend of author Washington Irving. Written in anapestic tetrameter (four feet of unstressed-unstressed-stressed), the poem’s rhythm and rhyme have made it easy to memorize.

Three of four hand-written copies of the poem are housed in museums (including the New York Historical Society Library). A private collector sold the fourth copy in December 2006; this copy was written and signed by Clement Clarke Moore and given as a gift to a friend in 1860. It was purchased for $280,000 by an unnamed “chief executive officer of a media company.”

1. To begin, read Moore’s “The Night Before Christmas.”

2. Now sample some parodies of the poem. Google "Parodies of the Night before Christmas," and you'll find several online. Note how the parodies imitate the style and form of the original but use different language and meaning to alter the text.

3. Next, think of the content you’d like your poem to contain. Theme? Idea? Think about the examples you read and consider other possibilities. Here are just a few:

4. When you’ve got an idea in mind, begin writing. You should, of course, model your work after the original while addressing a completely different subject matter. If the Moore poem is longer than you’d like your parody to be, simply write something shorter. Be sure to follow the rhythm and rhyme schemes of the original poem – that is, maintain the sense of music that Moore created. Allusions to Moore’s poem are fun to include.

3. As always, you’re invited to post your poems as comments (finished or in draft form) for other blog readers to enjoy.

Example: “Twas the Night before Hanukah”

Email ThisBlogThis!Share to TwitterShare to FacebookShare to Pinterest
Labels: Adele Kenny, Poetry Prompt for Writing Parodies of The Night Before Christmas, The Music In It Poetry Blog