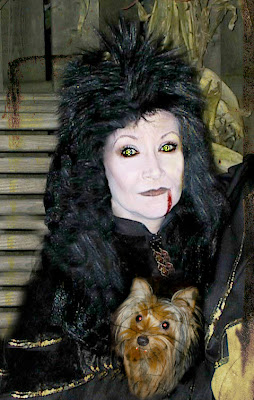 Halloween is just four days away—one of my favorite days of the year!

It's widely believed that Halloween was influenced by western European harvest festivals with roots in earlier traditions, especially the Celtic Samhain (pronounced SAH-win). Samhain, the Celtic New Year, was celebrated on November 1st. According to the American Folklife Center at the U.S. Library of Congress, the Celts gathered around bonfires lit to honor the dead. At Samhain, the Celts believed that the wall between worlds was at its thinnest and that the ghosts of the dead could re-enter the material world to mingle with the living. At Samhain, the Celts sacrificed animals and wore costumes (most probably animal skins). They also wore masks or colored their faces to confuse faeries, demons, and human spirits that were thought to walk among them.
Originally celebrated on May 13th from 609 AD, the date of All Saints’ was changed by Pope Gregory IV in 835 AD to November 1st, the same day as Samhain. All Saints’ was followed by All Souls’ Day on November 2nd and, by the end of the 12th century, these days together became Holy Days of Obligation—days in the Church’s calendar set aside to honor the saints and to pray for the souls of the recently departed. Related traditions included groups of poor people and children who went “souling” from door to door on All Saints’/All Souls’ to beg for traditional soul cakes (mentioned by Shakespeare in The Two Gentleman of Verona when Speed accuses his master of puling [whimpering] like a beggar at Hallowmas). In return for the soul cakes, the beggars promised to pray for the households’ dead. “Souling” is very likely the older tradition from which today’s trick or treating evolved. Click here for a Soul Cake recipe: Click here for a Soul Cake recipe.
Dressing up in costumes (called “fancy dress” in England) has a long history. Masked balls and other fancy dress occasions were popular long before the custom of wearing costumes on Halloween came into popular practice. Halloween costumes as we know them today were first recorded as late as 1895 in Scotland with little evidence of the practice in England, Ireland, or the US before 1900. Early Halloween costumes took their character from Halloween’s pagan and Gothic sensibilities and were worn mainly by children. These costumes were made at home from found materials, but by the 1930s, several companies began to manufacture Halloween costumes for sale in stores, and trick or treating became popular in North America.
From the time I was little, I enjoyed Halloween costumes for the pure fun of them but also because in costume I was able to step out of myself and into another personality. Back on October 23, 2012, we wrote about masks. This week, in honor of Halloween, the challenge is to write about a costume that you’ve worn, would like to wear, or would never wear (an actual costume or a metaphorical costume).

Write a poem about a costume “experience” that you  had as a child or as an adult.

Write a poem about a costume that you’d love to wear. What’s the “character” you’d like to “become” on a Halloween night? Why and how would a particular costume take you out of yourself and into a new personality?

Write a poem about the costume would you never want to wear and why.

Write a poem about a Halloween costume that corresponds to a current news event; be sure to explain why you would choose this costume.

Write a poem in which you “create” a bizarre costume that makes no reasonable sense—a fantasy costume. Describe it and explain what it means to you.

Write a poem about the animal you’d like to dress up as and “become” on Halloween night.

Write a poem about a historical person whom you’d like to “become” on Halloween.

Write a poem about about a costume party that you attended.

Remember as you write to let your poem take you where it wants to go and to be aware of meanings other than the obvious.