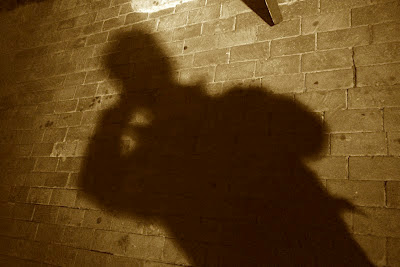 When I was a child my mom sometimes sang me to sleep with a song called “Me and My Shadow,” or my dad often entertained me into the “land of Nod” with stories about hand shadows that he made on my bedroom wall. Remembering those nights filled with music, stories, and the wonder of shadows led me to this week’s prompt.

Shadows have an intriguing, mystical aspect, and we often encounter then in poetry, even when the poems’ subjects are not specifically shadows or even shadow-driven. “Shadows of the world appear” in part II of Tennyson’s “The Lady of Shalott;” in Eliot’s “The Hollow Men,” we read “Between the motion / And the act / Falls the shadow;” and in Yeats’s “When You Are Old,” we find the deep shadows of a loved one’s eyes – and this is just a tiny sampling!

Superstitious thought proposes that your shadow is part of your soul and that to step on or throw stones at a person’s shadow may cause that person harm. In dreams, shadows are said to represent a person’s latent potential, fear, illusion, and unknown parts of the self. Seeing your own shadow in a dream may also signify an aspect of yourself that you haven’t yet acknowledged or recognized; it may also suggest a quality or part of yourself that you reject. In Jungian psychology, the shadow or “shadow aspect”  refers to the unconscious – everything of which a person is not fully conscious, as well as a facet of personality that the conscious ego doesn’t recognize within itself.

Shadows typically suggest things that are dark or threatening, but have you ever seen the beauty in a weeping willow’s shadow on a lake, or the way cloud shadows float over a field or mountainside? This week, let’s think about shadows and write about them. Keep in mind that you needn’t go to the dark side in a shadow poem – though you can, of course, if you wish to.

Be sure to stretch your inner vision and your imagination. Remember that a poem needs room to move, sometimes away from your original idea. Give your poem room to veer off course and to change direction.

More important than your compositional method or conceptual framework is how you make a poem about a single experience (idea, time, place, bird, stone, stream, etc.) bigger than its singularity. In poetry, it’s important approach the universal through the personal.

1. Write a poem about your shadow.

2. Write a poem to your shadow.

3. Write a poem in which shadow becomes an extended metaphor.

4. Write a poem about hand shadows on a wall.

6. Write a poem using the following (borrowed from T. S. Eliot’s “The Waste Land”) as your title or epigraph: “Your Shadow at Evening Rising to Meet You.”

7. Write a poem based on the following shadow poem, written by Emily Dickinson (c. 1863):

8. Do you remember the old song “The Shadow of Your Smile,” famously sung by Barbara Streisand? Try writing a poem based on the title of that song. Here’s the song for you to enjoy:

Email ThisBlogThis!Share to TwitterShare to FacebookShare to Pinterest
Labels: Poems about Shadows, Poetry Prompt, Shadow Poems, The Music In It Poetry Blog