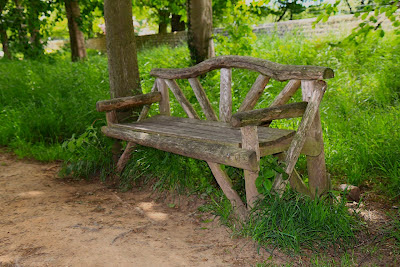 The weather here has been unbearably hot and humid (8-10 consecutive days in the 90s, and 104º F. in today’s forecast) – not great weather for writing much of anything. So … I thought it might be fun and interesting to try writing monostitch poems this week.


A monostitch poem is a freestanding, one-line poem, balanced in its own time and place. Historically, the monostitch dates to ancient times (reportedly including the Roman poet Marcus Valerius Martialis, though I was unable to locate any examples). The form received attention again in late nineteenth century Russia when Valery Bryusov published this single-line poem in 1894:

I’ve found a few “rules for monostitch poems” that may serve as guidelines for your writing this week.


Note: Monostitch titles are as important as the poems, so be sure to create a great title.

Coward by R. A. Ammons
Bravery runs in my family.

Now, find a cool spot, a shady place, a bench beneath the trees, or crank up the AC indoors and give monostitch poems a try. Here’s something to consider: maybe your monostitch will serve as a springboard for a longer poem. If that happens, go with it and see where your one-liner leads you!

Email ThisBlogThis!Share to TwitterShare to FacebookShare to Pinterest
Labels: Monostitch Poems, Poetry Prompt, The Music In It Poetry Blog