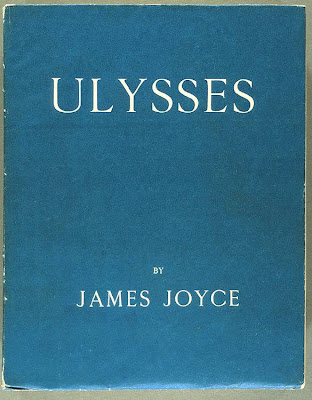 Happy Bloomsday! Bloomsday celebrates the day on which James Joyce's novel Ulysses takes place in its entirety – June 16, 1904 (it is believed that this is the day Joyce first went out with his future wife Nora Barnacle). Bloomsday is named after Leopold Bloom, the main character in Ulysses.
Today, Joyceans in Dublin and throughout the world celebrate with staged Ulysses readings and other related festivities. In Dublin, the annual event isn't just celebrated on June 16 – the reveling lasts a week with Ulysses walking tours, literary-themed pub crawls, museum exhibits, commemorative Irish breakfasts and teas, and the annual Messenger Biker Rally in which people dressed in Joyce-era clothing ride old bicycles along the route that Leopold Bloom would have walked.


Ulysses was the subject of a famous 1933 obscenity trial, but was found by a U.S. district court in New York to be a work of art. The furor over the novel made Joyce a celebrity.

I love this James Joyce quote
(though I'm not absolutely certain that's all it takes or that it would work with poetry):
"I've put in so many enigmas and puzzles that it will keep the professors busy for centuries arguing over what I meant, and that's the way of insuring one's immortality." (James Joyce)
Share |
Posted by ADELE KENNY at 10:19 AM